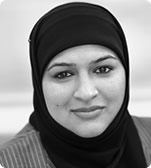 Sidrah Khan joined Stephen Lickrish and Associates in May 2006 and has worked as a diligent caseworker on numerous complex fraud cases, including a large electoral fraud case and several money laundering investigations by the Serious Fraud Office, HMRC and the Crown Prosecution Service.

Sidrah completed her LL.B Law degree at Manchester Metropolitan University in 2004. In 2005 she went on to complete her LPC at the same establishment. She has now successfully completed the ‘Work Based Learning Scheme’ that was piloted over a two year period and the Professional Skills course. She qualified as a solicitor in 2011.

Sidrah is also fluent in Urdu and Punjabi.

In compliance with the Solicitors Regulation Authority’s Transparency Rules 2018, Sidrah Khan is a qualified solicitor in her own right and will support the Directors when dealing with single hearing summary only motoring/driving offences (under Part I of the Road Traffic Act 1988 and s89 of the Road Traffic Regulation Act 1984) which includes the administration, issuing correspondence and preparation of such matters.

Our Directors (namely, Stephen Lickrish and Saeed Hafezi) are recognised as supervisors by the Legal Aid Agency and will always supervise the care and conduct of your case and Sidrah Khan’s work.