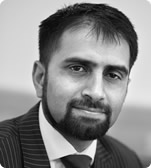 Saeed Hafezi qualified as a solicitor in 1994. He became a partner in a leading North London firm before moving to Manchester to help establish Stephen Lickrish and Associates Ltd as the Co-Director.

He has gained a reputation amongst clients for providing a high level of commitment to securing the best possible outcome to their cases. Saeed has established effective working relationships with Counsel and Queens Counsel who specialise in defending people and their businesses against allegations of business related crime and regulatory breaches. This has led to Saeed developing an enviable track record of winning cases.

Saeed has also advised and represented clients before the Criminal Cases Review Commission and the Court of Appeal. He has represented clients facing grave and complex criminal cases investigated by the Serious Fraud Office, HM Revenue & Customs, the Counter Terrorist Unit and specialist UK investigators. He has worked in other jurisdictions to interview witnesses and collate evidence in countries such as Russia, South Africa, Turkey, Cyprus and the Netherlands.  He has represented the only serving SAS officer ever to be prosecuted.

Saeed has also acted for clients facing allegations of evasion of duty on imported goods and subsequent confiscation proceedings.

In compliance with the Solicitors Regulation Authority’s Transparency Rules 2018 Saeed Hafezi is highly qualified to deal with all aspects of single hearing summary only motoring/driving offences (under Part I of the Road Traffic Act 1988 and s89 of the Road Traffic Regulation Act 1984) which includes the attendance, preparation and representations at a Magistrates Court.

Our Directors (namely, Stephen Lickrish and Saeed Hafezi ) are recognised as supervisors by the Legal Aid Agency and will always supervise the care and conduct of your case.